In the 2014 post-monsoon season in Nepal, Adventure Consultants operated an expedition into the heart of the Khumbu Valley in the Himalayas to explore the region and climb Island Peak.

27 October 2014 - Descent to Dingboche
Posting from the AC Office: After a night in Lobuche, the team is heading to Chhukung, the staging point for their Island Peak climb. 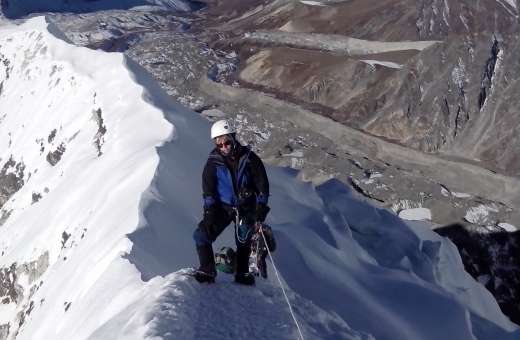 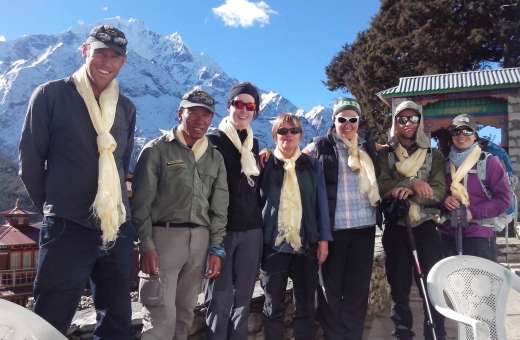 2 November 2014 - Team Reunites
Since summitting Island Peak, our team regrouped in Chhukung as some members had decided to visit the crystal blue circular lake next to the enormous glacier of the Amphu Lapcha. We left Chhukung and trekked downstream to Pangboche where we visited the monastery and celebrated Kelly's birthday over delicious local food while enjoying great company.

5 November 2014 - Back In Kathmandu
After a 6m breakfast and 7am flight, the team found themselves back in Kathmandu. They enjoyed a final team dinner in Thamel and said their goodbyes after a successful adventure full of great memories, rewarding challenges, successful summits and new friendships. 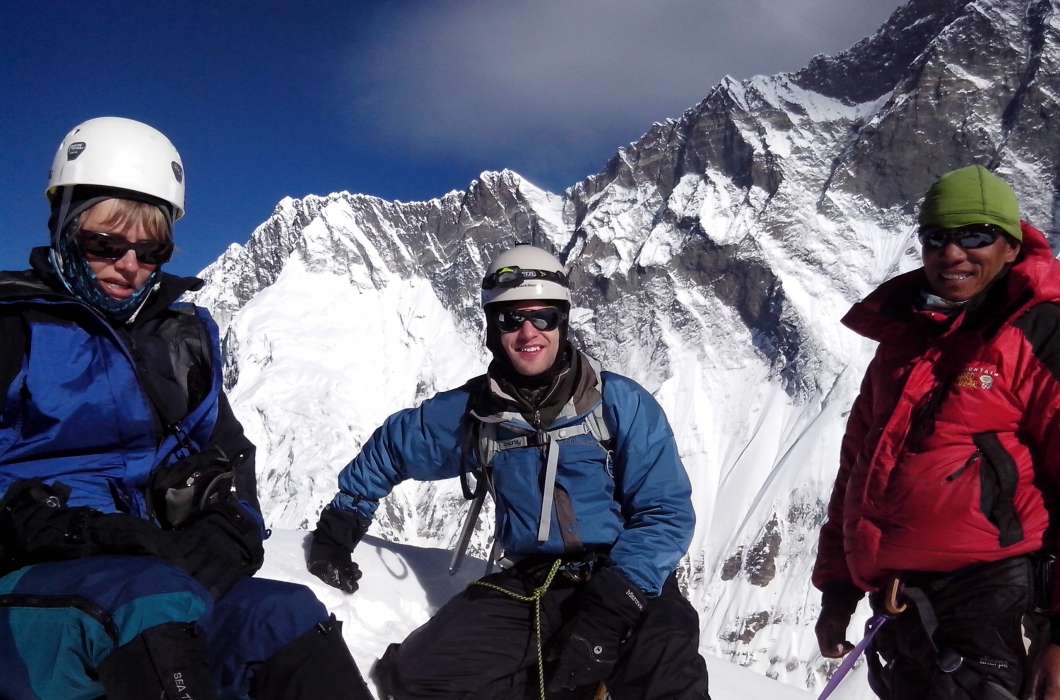 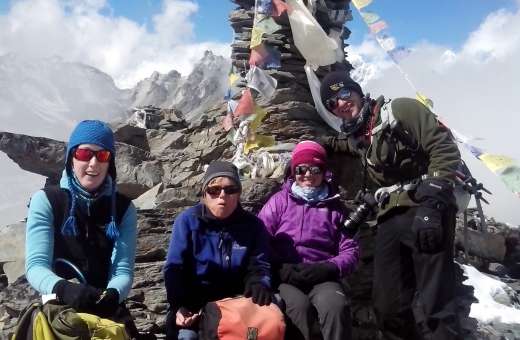 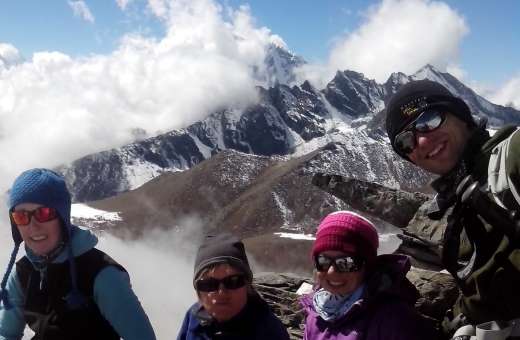 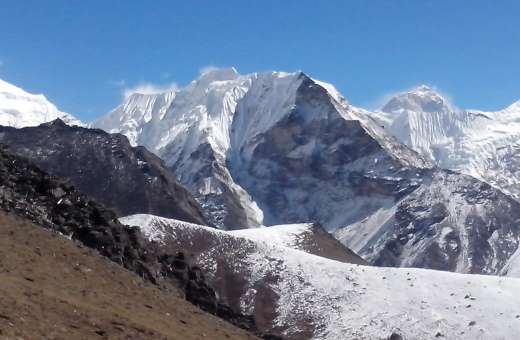 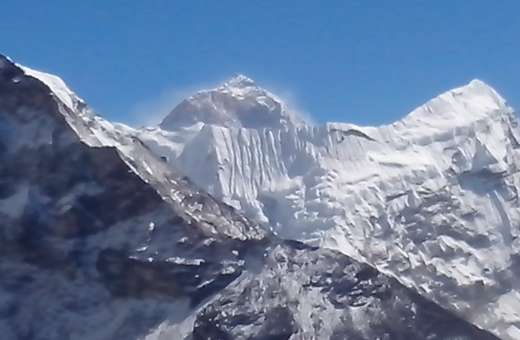 29 October 2014 - Ascent of Chhukung Ri
Today the whole group made the ascent of Chhukung Ri. The surrounding peaks came alive with plumes of cloud and blowing snow. Lammergeier vultures soared above as the wind and the view took our breath away. 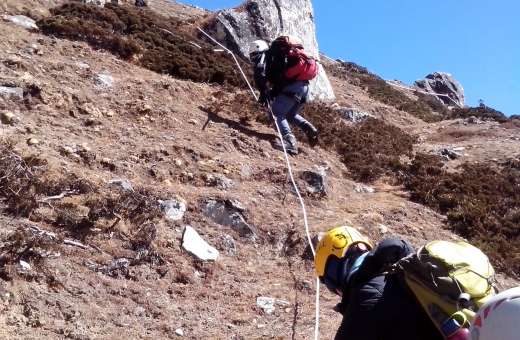 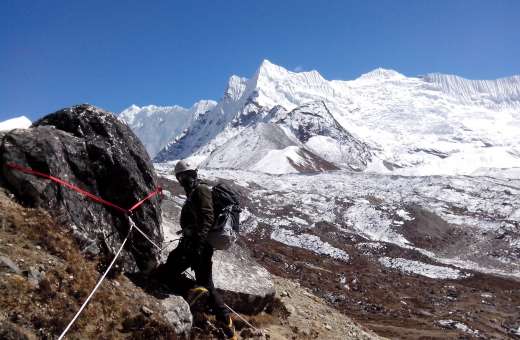 28 October 2014 - Rope Skills in Chhukung
Today the team practiced rope skills necessary for Island peak. We crossed a frozen river behind our palatial lodgings in Chhukung then ascended and descended multiple times a barren hillside with magnificent views of Ama Dablam and other nearby glaciated peaks. Tomorrow an ascent of Chhukung Ri is on the agenda before the climbing team relocates to Island Peak Base Camp. 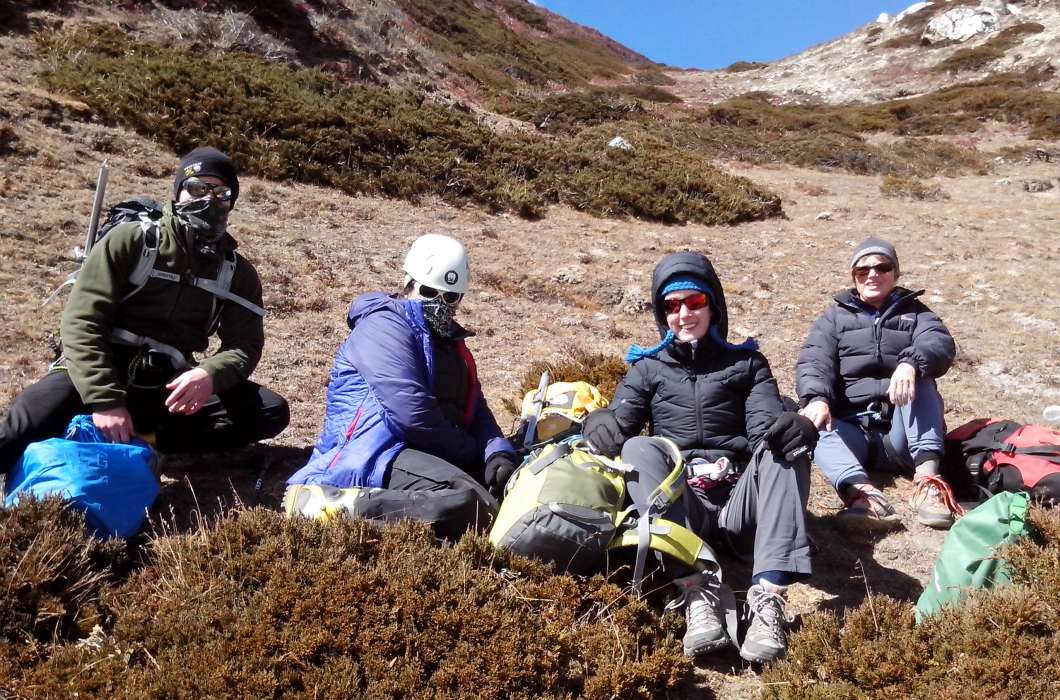 Meeting in Kathmandu on 14 October and working together over the next 24 days, the team will visit Everest Base Camp, climb Kala Patar to gain spectacular views of Mount Everest, cross the scenic Kongma La pass and then head to Chhukung from where they start their summit bid of Island Peak at (6,189m/20,305ft). We will be posting regular updates from the team on this page. 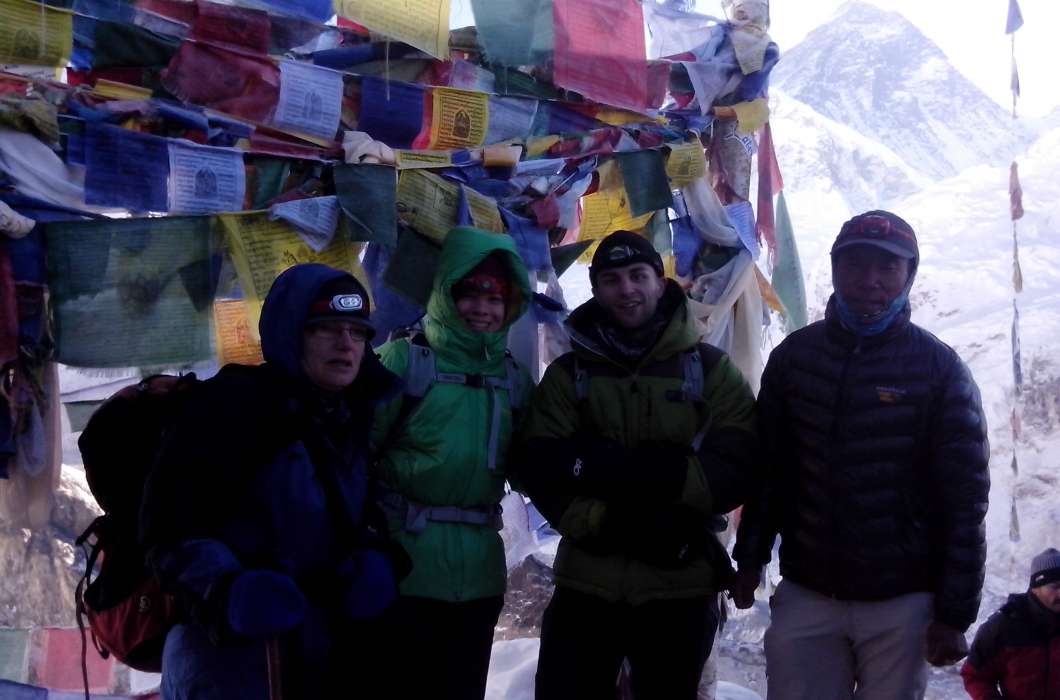 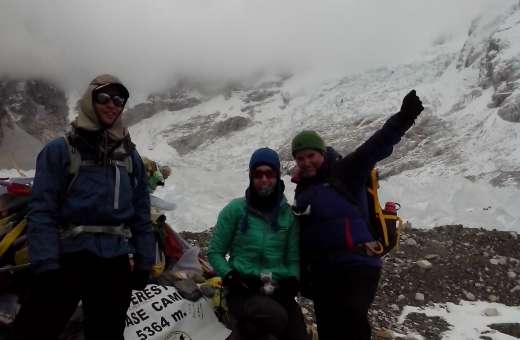 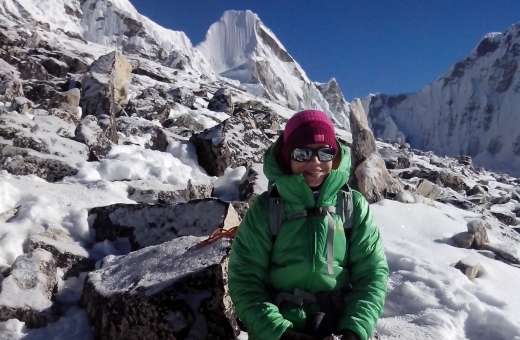 24 October 2014 - Dingboche to Lobuche
On the way to Dingboche, we began to cover our faces as protection from the high altitude sun, the wind which blows dust from the glacial moraine and the dry air which threatens to give us a cough. Yesterday we made our way from Dingboche to Lobuche under the magnificent panorama of icy peaks, in contrast to the pastoral landscape which provided a gradual climb to higher altitudes.

Now at almost 5,000m our bodies are adjusting more slowly than before to the thin air. Over dinner last night we came to a collective conclusion that fresh spicy chilli offers a welcome relief from the  headache that sometimes accompanies acclimatisation. Today we will take a short walk at this altitude and return to Lobuche for the night. 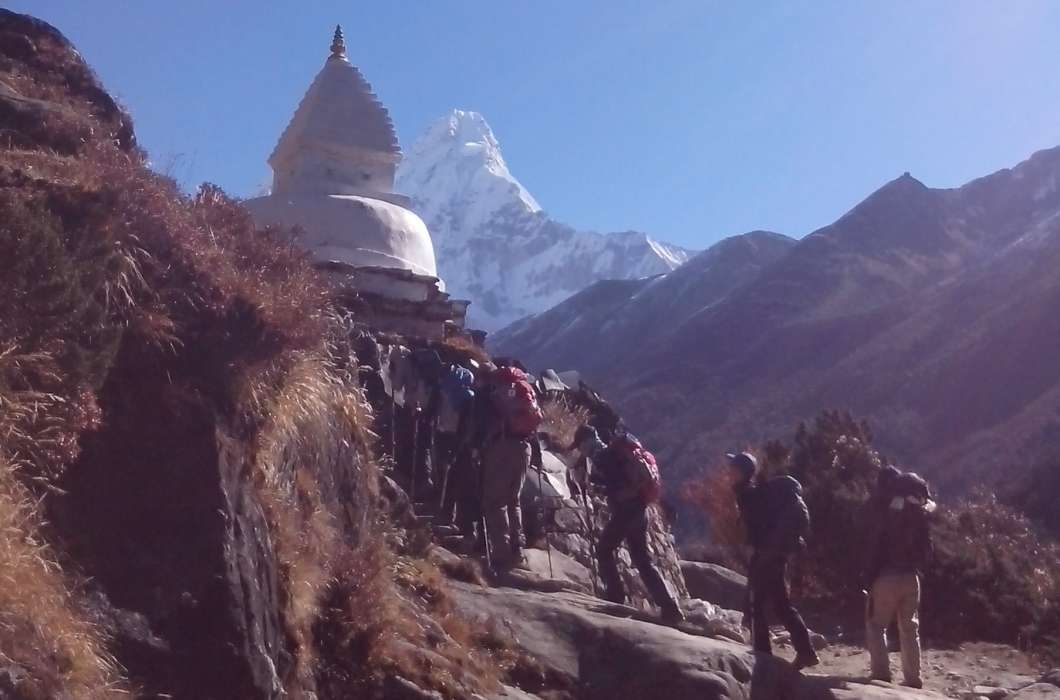 21 October 2014 - Above the Treeline in Dingboche
As we wandered into the frosty morning near Tengboche Monastery, our first steps were soothed by the bells of the swaying yak train ahead. The cool afternoon with was tempered by the warmth of the sun as we made it above treeline to Dingboche and the dusty plains of the upper valley. The team is acclimatising well. Nonetheless, a rest day tomorrow is a welcome part of our schedule. 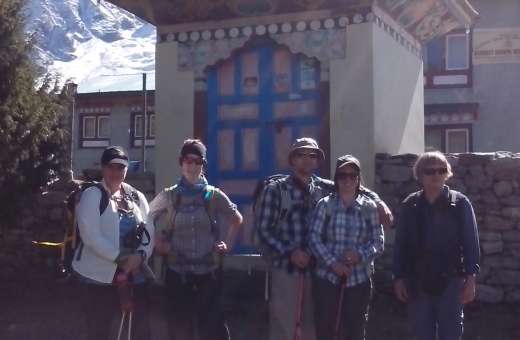 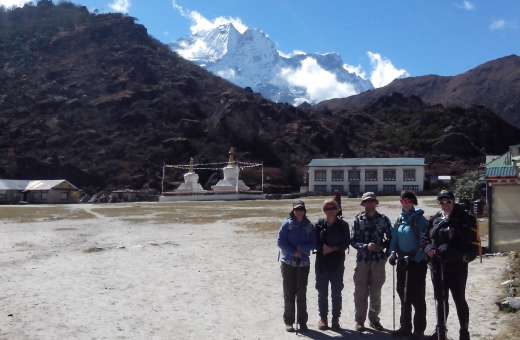 20 October 2014 - Day Trip to Khumjung
We enjoyed a beautiful trek surrounded by magnificent snow-covered peaks to Khumjung, home of the Khumjung School, founded by Sir Edmund Hillary in 1961. Then, after a day and a half in Namche Bazaar finalising our luggage contents, we are on our way again. 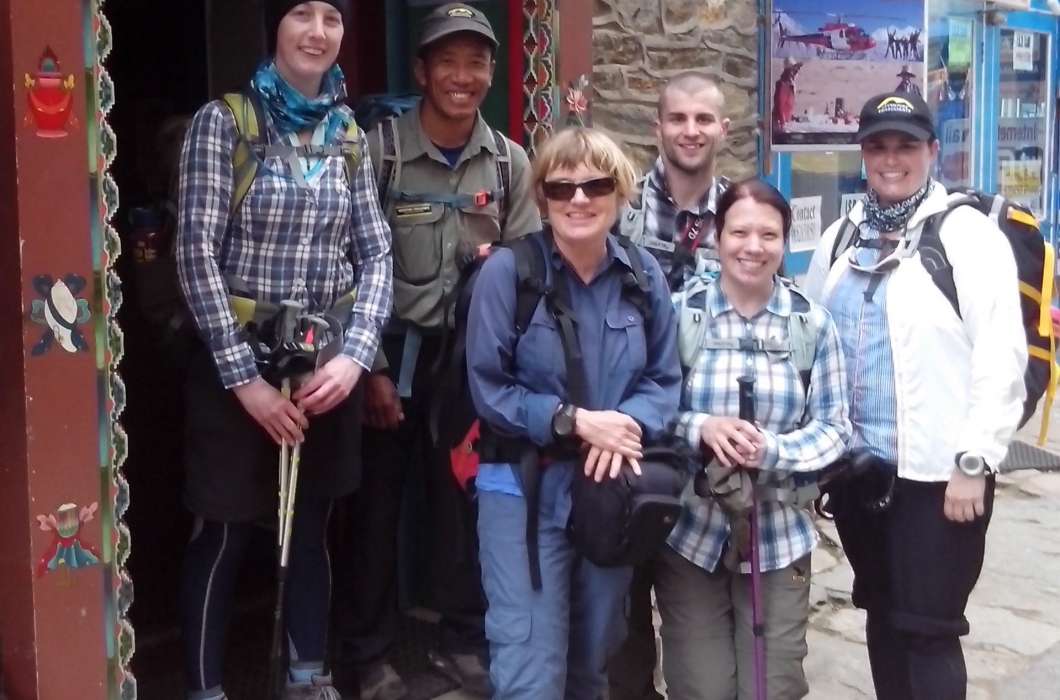 16 October 2014 - Poised to Fly
The Island Peak/ Khumbu Trek 2014 team are in Kathmandu and are enthusiastically anticipating their departure for Lukla tomorrow.

18 October 2014 - Together in Namche Bazaar
After an early start from the Sunrise Lodge in Phakding, the team enjoyed a picturesque walk to Namche Bazaar. In the morning the sky was painted with pure white strokes of cloud, which, by early afternoon provided welcome shade as the fresh breeze cooled our hike up the final hill to a welcome cup of masala tea at the Khumbu Lodge. 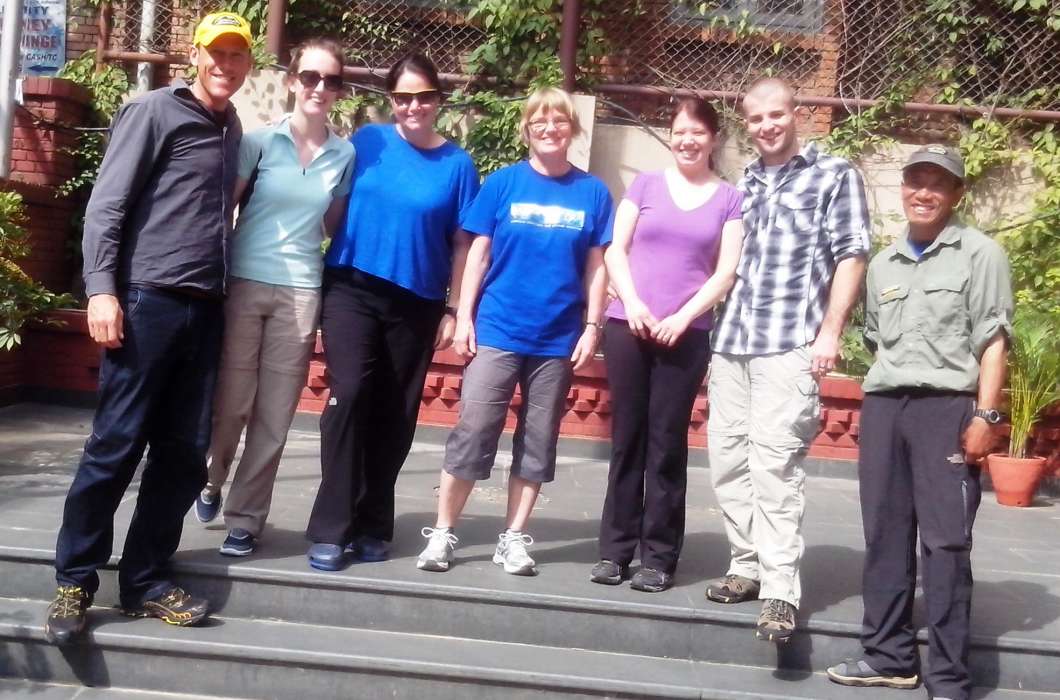 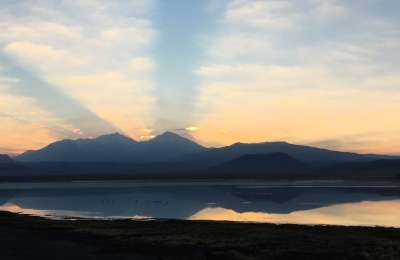 Dispatches - Ojos del Salado Private Expedition 2020
To 6500m then down to the Coast! - Yesterday, the 24th, we gave Ojos a good nudge, but in spite of Rory giving it his ALL, we had to turn around...