Follow our Greenland Crossing team as they skied east to west across Greenland in April/May 2014. The team was led by Róbert Þór Haraldsson from Icelandic Mountain Guides, our partners in Iceland.

The Adventure Consultants Greenland Crossing expedition is set to travel 540km/335 miles across the interior of Greenland from Ammassalik/Kulusuk on the East Coast to Sondre Stromfjord on the West Coast, traversing the world's second biggest sheet of ice.

It takes about 10 days to climb up to the highest point of the ice sheet on this route, topping out at 2,500m. From the summit it takes about a week to reach the phantom radar station DYE 2, used to monitor the Russians during the Cold War and surely one of the most bizarre buildings on the planet. From this strange place it takes around 5 days to get to terra firma - Hill 660, the landfall on the western side of the ice sheet.

Depending on the snow conditions and weather that the team encounters, the expedition will last between 21 and 30 days in total.

We will post occasional progress reports on this page when we hear from the team with news. This won't be every day!

15 April 2014 - The Greenland Traverse is underway
The weather on the East coast of Greenland was slowly clearing this morning and at 1.30pm, the helicopter took the 5 expedition members and their sledges on a beautiful flight over the Semelik fjord to the edge of the glacier.

In calm weather and clear sky, the team skied the first 7km before erecting their tents. They are warm and comfortable in their sleeping bags now with an outdoor temperature of -20°C/-4°F.

On Wednesday the weather was cold and clear with a wind storm coming through which preceded heavy snowfall on Thursday. The team remained hunkered down in their tents. They spent some time on Thursday constructing 2-metre high snow walls to protect themselves from the heavy winds that were forecasted for Friday. The weather cleared over the weekend and the team has made good progress, despite the sastrugis (spectacular and beautiful ridge formations that the wind makes on the snow surface) that have made travel a bit more challenging.

30 April 2014 – The team reach the high plateau
We've just heard in from the Greenland team. They have now reached the highest point of the plateau but forecasts are predicting heavy winds over the next few days so their progress may be slowed.

6 May 2014 - Team pass DYE 2 station
We've just heard in from the team who, despite a broken ski, traveled 25km yesterday, passing the DYE 2 Station. Estimates are that it will take another 6 to 7 days for the team to complete their traverse, which should have them at the finish in time for their scheduled flight back home.

13 May 2014 - Congratulations to the team on a successful crossing!
Congratulations to the Greenland Crossing Team of Róbert Þór (Expedition Leader), Bjarni, Antony and Eric. The team completed their crossing on Saturday the 10th of May. They are now in Kangerlussuaq and will fly from Nuuk to Iceland tomorrow where there will be a big celebration.

The team managed several difficulties along the way, including severe storms with winds up to 120 km/hr (33m/s), extreme temperatures as low as -35°C, difficult snow formations and various technical difficulties, including a broken ski, ski pole and a ski-binding. Well done! 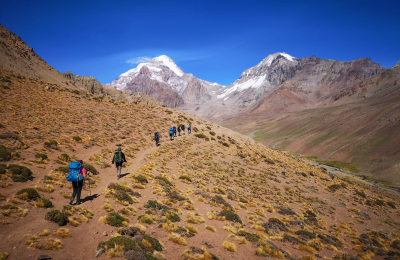 Dispatches - Aconcagua #1 2022
Waking early for our carry to Camp 1 today rewarded us with a stunning sunrise over base camp and surrounding mountains... 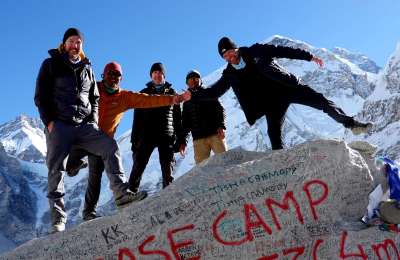 Dispatches - Three Peaks Nepal 2022
Following a ridge-line to the summit glacier and climbing up a steep snow slope we reached the summit of Island Peak......

Dispatches - Island Peak & Khumbu Trek #2 2022
Another early start, but this time to board the first heli flight out of Lukla, bound for Kathmandu....