Read here about our 2004 epic mountain bike journey across the stunning landscapes of Bhutan.

Saturday 25 September 2004 - Thimphu
The Adventure Consultants Bhutan Mountain Bike 2004 crew members have all arrived in Bhutan, to be greeted by mild temperatures and a charming festival atmosphere. We met in Bangkok on 23 September and flew on Druk Air to Paro in Bhutan yesterday. With the rice harvest just about to begin giving a luminous green to everything and the monsoon on the way out, Paro is an oasis of calm to arrive into. We were met by our guides Ugyen and Rinzin and they took us on the grand tour of the impressive Paro Dzong and Bhutan's fascinating national museum, housed in the old watch tower for the Dzong (monastery).

Today with another early start, we traveled on to Thimphu, the capital of Bhutan. After changing into Bhutan national dress of kiras for the girls and ghos for the guys, we set off for the Thimphu Tsechu, an annual festival held in the Thimphu Dzong. Our group of Jen, Jon and Brian from Colorado, USA, and Frank, Sarah, Doug and Suze from New Zealand, very much enjoyed being part of the huge crowd. We had to tear ourselves away finally to eat another sumptuous meal! There is a distinct possibility that we will all gain weight biking at high altitude rather than losing it!

Our bikes have also all arrived this evening to our hotel, and we begin our first day of biking tomorrow, riding over the 3,600m Dochu La pass to the town of Punakha. We hope to be in contact occasionally over the next 10 days with updates for you, so until then, tashi delek! 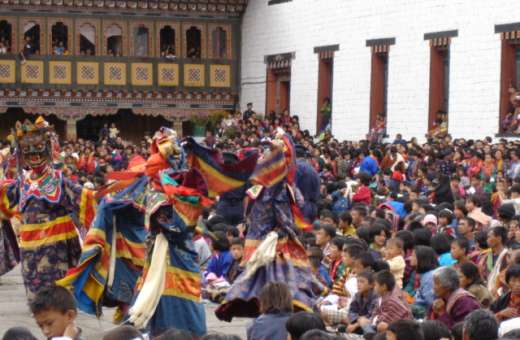 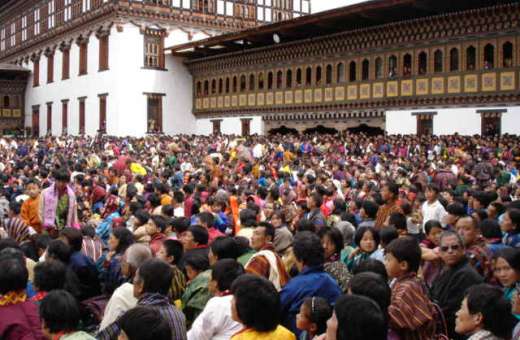 26 September 2004 - Thimphu to Punakha
After all the final adjustments were completed, our bikes were finally assembled and ready for action. Today we rode the 21km to the top of the Dochu La, all on the winding narrow sealed roads, climbing up and up into the mist and then descending over 50km to the almost tropical climate (30 degrees!) of the stunning Punakha Valley. More downhill than up so everyone was happy for their first day and not one person used the accompanying transport. Our accommodation was at the luxurious Meri Puensum Hotel, with all enjoying a beer on the patio before another sumptuous meal.

27 September 2004 - Punakha to Gangtey
An attempt at an early start saw us riding in pleasantly hot morning sunshine to the town of Wangdi Phrodang and then we set our sights on the enormous Pele La climb. All 68km of climbing up through small highland villages took all day and we finished in a monsoon rain shower before branching off to descent into the Gangtey Valley. Some folk rode the whole way; Brian, Doug and Jen, arrived just as the light faded, muddy from the downhill but cheered by their long distance endurance riding feat! The rest of us rode the bus once we got soaked by the late afternoon rain (saving ourselves for another long day tomorrow also!). The Gangtey Valley has no phones or electricity and feels quite remote. We stayed in the beautiful Phuntscholing guesthouse, a traditional Bhutanese home converted to lodgings and saw the local weavers at work the next morning, creating their intricate fabric designs they are so famous for. 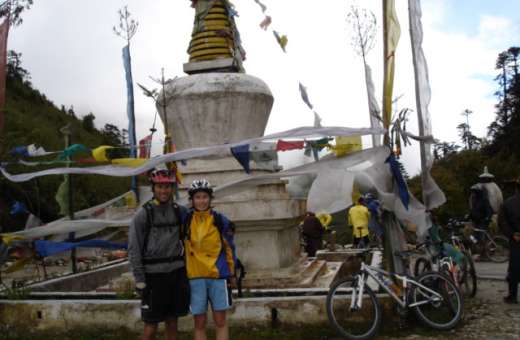 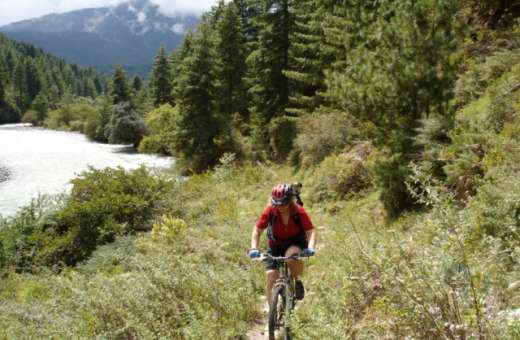 28 September - Gangtey to Bumthang
Settling into our routine now, with early starts and long days on the bike, we got the bikes loaded onto our truck and bus and headed out early for the Pele La this morning. With more than 120km to cover we elected to use motor power for the first mini-pass and then start climbing our way up to the 3,400m Pele La pass. There wasn't much time to admire the view once we were there as we had a 70km downhill, then flat, then down, then up to ride to reach Trongsa, before continuing on by bus to our home for the next 4 nights, Jakar in Bumthang. Tomorrow we are planning a sleep in and a shorter ride!

29 September 2004 - Day Ride to Choskhor Valley
What a great feeling it is to unpack your bags, knowing you have a few days of great riding coming up! Today we headed out north of our lodge at Jakar town, to explore the Choskhor Valley, one of the four valleys of the Bumthang region (the others are Tang, Ura and Chhume). This area is regarded as heartland Bhutan, with small villages and agriculture the main activity. Being at higher elevations of 2,600m you see fields of pink tinged buckwheat ready for harvest, rather than the rice crops typical of the lower altitude valleys we have already passed through, and the surrounding hills still have their original forest cover, which is what makes Bhutan so unique in the Himalayas.

The biking today was mostly off-road with some great single-track sections and unpaved tracks through the forests. The picture shows Jon on some superb riverside single-track. We stopped in on another colourful festival at Thangkabi, impressed the locals with some of our technical steep descent skills and arrived back at our lodge suitably muddy, tired and hungry again! 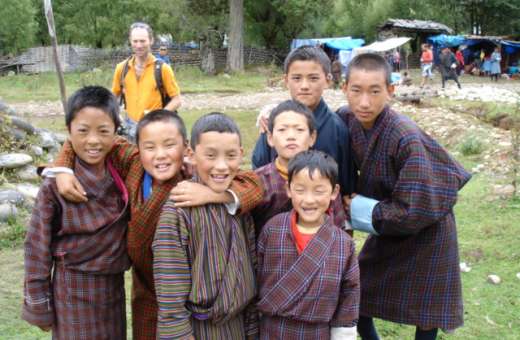 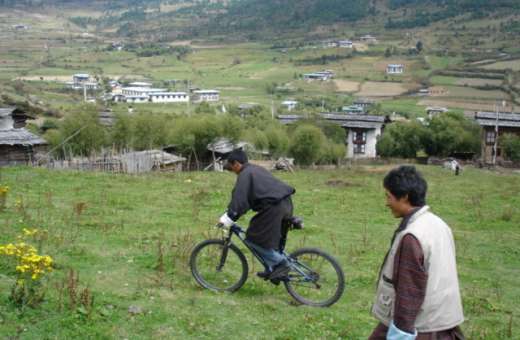 1 October 2004 - East to Ura
We had a very wet day yesterday, riding in rain all day to the Tang Valley and back. The riding was mostly off-road, about 70km in total but without the views we were hoping for unfortunately. Hence today we took it easy to start with and everyone took our bus for the start of our day ride to Ura, the most easterly point we will visit in Bhutan.

The day's riding consisted of a 14km uphill on sealed road to Shertang La at 3,590m then a fun steep descent to the village of Ura, where we were lucky to come to a stop before crossing the archery game that was in action! Hoards of kids lept at the chance to ride our bikes before we could wrestle the bikes back off them and tour through the recently renovated Geyden Lhakhang temple. We then rode the 10km back up to the pass and enjoyed a huge free-wheeling 40km descent back to the Jakar Valley. It doesn't get any better than that, a great day had by all.

2 October 2004 - Bumthang to Trongsa to Chhuzomsa
Brian, Jen and Jon left at daybreak for the 180km ride to Trongsa, all on Bhutan's famous sealed winding roads. The rest of us left shortly after and with some riding uphill, spending periods on the bus or truck and then the huge descents from the Yotong La and Pele La, we made it to our lodging at Chhuzomsa before nightfall. Jon and Brian rode the whole distance, amazing stuff guys, congratulations! On the way we passed a fascinating array of sights; schools, villages, weaving studios, Trongsa Dzong, cows and dogs galore, road works, waterfalls and deep ravines, lush terraced fields and farmhouses, and whole hillsides of trees buzzing with the sound of crickets. A day that will stick in the memory forever. 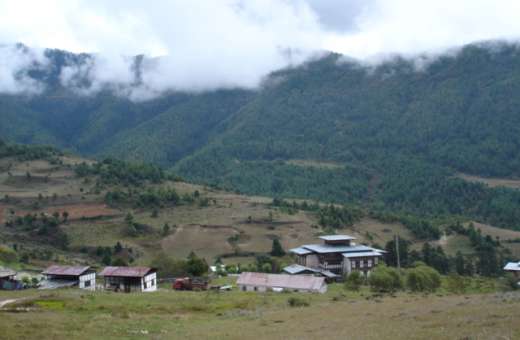 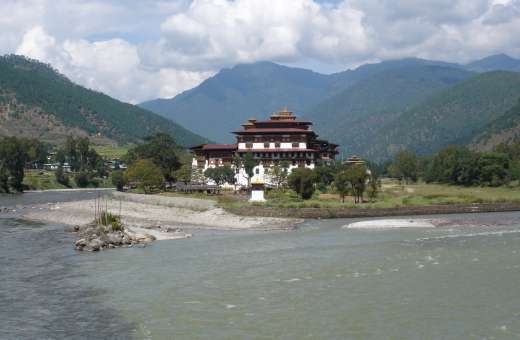 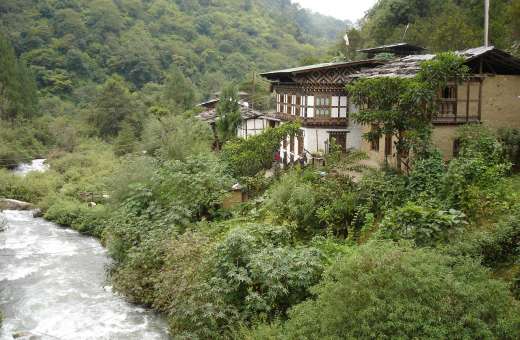 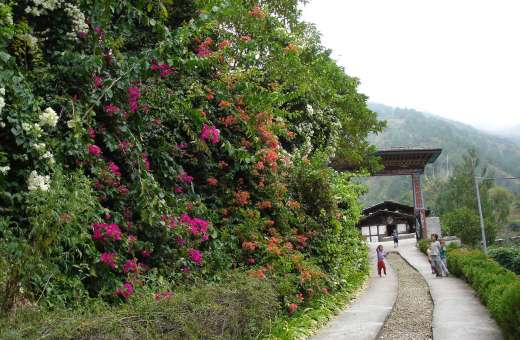 3 October 2004 - In the tropics in Bhutan!
We awoke to the sounds of the roaring Dang Chhu (river), which flows right by the bedrooms of our lodge, followed by another delicious breakfast in the all vegetarian restaurant and then prepared for a morning ride in 30 degree Centigrade heat fanned by a light breeze. It's hard to believe you are in the Himalayas on days like these. Our riding took us back through the town of Wangdi Phodrang, where the Sunday market was in full swing, and then on a meandering track by the river to the recently restored Punakha Dzong. This is one of Bhutan's most spectacular Dzong sites, towering over the confluence of the Mo and Po Chhus. After an extensive tour of the various courtyards and the congregation hall (picture of Jen with some Punakha Dzong monks), we piled onto our bus for the journey over the remaining miles through to Thimphu. We dined at our Hotel with several invited Bhutanese guests, giving us a further insight into our fascinating host kingdom.

Tomorrow is our last full day here in Bhutan and we plan to ride our mountain bikes on the trail to the Taktsang Monastery in the Paro Valley, something that possibly hasn't been done before! 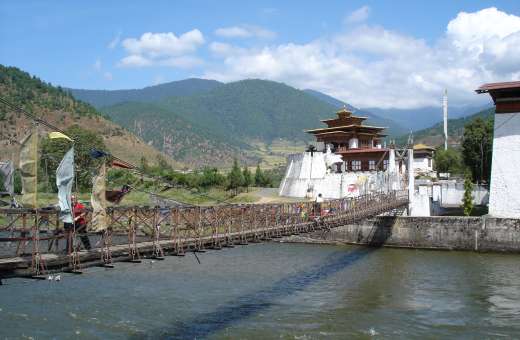 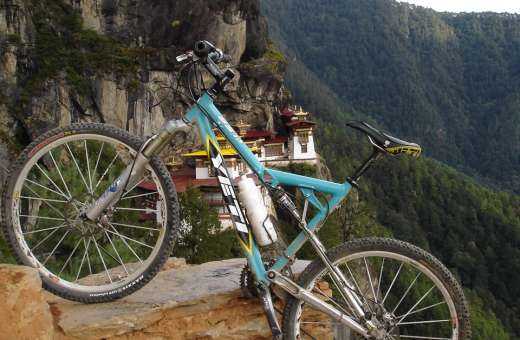 4 October 2004 - Taktshang Monastery
Saving the best until last, today we were able to ride to and visit Taktshang Goemba, or the Tiger's Nest as it is known. You simply can't believe it when you first see the sight of the monastery buildings clinging to the side of the cliff, 900m above the valley floor. With superhuman effort, we rode and pushed our bikes up 500m in vertical from the trailhead to a lookout spot directly across from the monastery at 3,140m, and from there continued on foot. We were able to enter and explore the monastery, which is being reconstructed after the fire in 1998 which destroyed much of the building. In some areas the paint on the elaborate murals was still drying, giving us quite an insight into this craft. Taktshang is regarded as one of Bhutan's holiest sites and you cannot visit here without coming away with a much better sense of what Buddhism is all about in this part of the world.

Hours later, it seemed, we emerged and got ready for our steep descent. Thoroughly enjoyable technical drops and wide sweeping singletrack turns took us back to the base very quickly, and we were only disappointed to find out that we were not the first mountain bikers to have been up there. Furthermore, even someone on a uni-cycle had beaten us to it!

Tomorrow we're up early to catch our flight on Druk Air to Bangkok. Thanks for following our Bhutan mountain biking adventure! 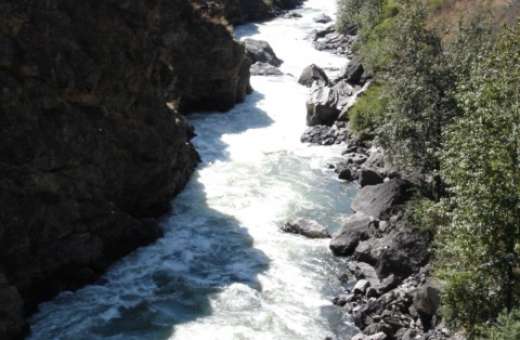 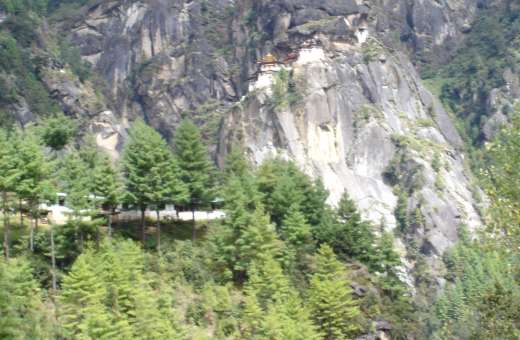 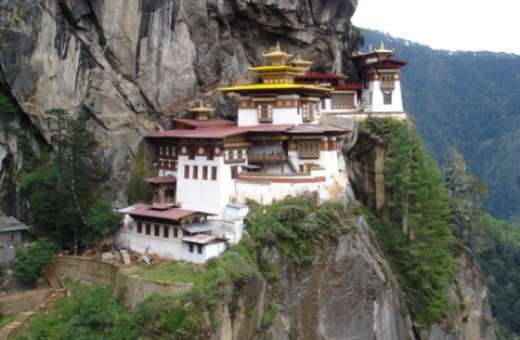 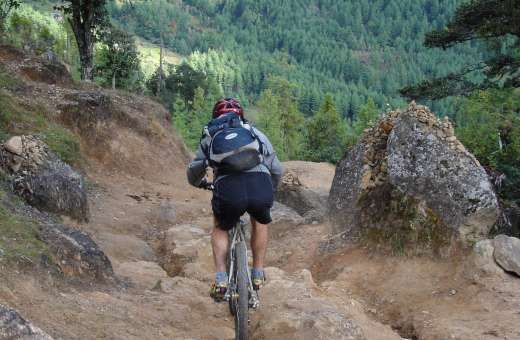