September 10 - Resting at Chinese Base Camp
The leader of the Adventure Consultants Cho Oyu Expedition 2001, Dean Staples, has called in with news of their progress so far. The group are all at the road end, or Chinese Base Camp as it is called, after having arrived there yesterday. They will rest one more night here and will then leave for their trek to Advanced Base Camp (ABC) tomorrow, taking two days to get to ABC. All in the group are feeling fine, and are ready for the move upwards tomorrow. On the journey from Kathmandu to Kodari they encountered large slips on the road and at one stage had to walk for 2km, with all the gear being ferried by porters. Another slip blocked the road between Kodari and Zhangmu but they managed to get through.

September 14 - Settling into Cho Oyu Base Camp
Hi everyone. All's well at Advanced Base Camp (ABC). We arrived here on the 12th with Mike and Curt arriving yesterday after spending an extra day at BC (Road End Base Camp) due to Curt not feeling well. Everyone is OK now and ready to go for our first hike up to Camp I to leave some gear. On the way to ABC one of the yaks lost it's load of 2 gas cylinders and they went all the way to the glacier bottom! So yesterday myself, Mingma and two Tibetans went down to retrieve 2 very battered gas cylinders! We'll be in touch again on Monday Sept 17th.

September 17 - Camp One Day Walk
The AC Cho Oyu Expedition members are resting at Base Camp (5,600m) today after a day walk to Camp One (6,400m) on Saturday. Dean Staples reported in by phone that all in group were in good health and enjoying another rest day after the first day of exertion at high altitudes. It took most in the group 5-6 hours to get up to Camp I, and then 3-4 hours to descend so a fairly long day on the feet for all - these times will improve as they acclimatise. Since Curt Dowdy was a day behind the others in arriving at Base Camp he went up to a halfway point to Camp I and then descended. Mike Roberts had a minor throat infection so he did not go up on Saturday and his throat has thus recovered.

Tomorrow they will all climb to Camp I and spend the night there, and then the following day will climb further up the ridge towards Camp II to cache some more gear. So far there are fixed ropes in place to Camp II. The weather has not been that good up until now. It has been snowing each day but that seems to be changing to clear mornings with snowfalls in the afternoons, which is the case today. The AC Expedition have a good site at Base Camp, as Ang Dorje had gone on ahead from the road end in order to ensure this. This morning they have been enjoying pancakes with Kiwi bacon and fresh coffee from Wanaka, cooked by the kitchen magicians Dawa and Ang Tshering, whilst being entertained with another of John Taske's Aussie jokes!

Everyone at Base Camp has been keeping abreast of world news and the terrorist attacks in New York by listening to radio, on which they can receive the BBC World Service.

September 20 - Overnight Camp I
After a two day sortie onto the mountain to spend a night at Camp I, the AC team are back at Base Camp today for a couple of rest days. They slept overnight at Camp I on the night of the 18th, and the following day climbed the ridge above Camp I to the base of the ice cliff before turning around to descend all the way to Base Camp.

The weather has been very stable for the past 3 days, and tomorrow should see some of the first teams to arrive at the mountain this season make their summit attempts. The AC Expedition plan to spend two days resting, then on Sunday Sept 23 they will climb to Camp I, then Camp II the next day, and descend the following day, Tuesday Sept 25th. Allowing more rest days after that and all going well with the weather, they will then be thinking about their summit attempt.

Two members of the expedition are going to turn around and start the journey home. Bernhard and Dietmar have both made the decision to leave and will be back in Kathmandu in a few days time. John Taske would like to publicly say hello to the team at OMI back in Australia, in particular Bruce Kiehne, Tony Horstman and Ian Phan.

September 25 - Restless Sleep at Camp II
The AC Cho Oyu team have returned to base camp after spending two nights at camps on the mountain. At Camp II (aprox 7,000m) a comfortable night's sleep is rarely possible and expedition leader Dean Staples described their night there as restless at best. Getting up to Camp I was easier this time around though! Now they are all resting in Base Camp for 3 days and plan to move onto the mountain again on Friday Sept 28th with a summit day attempt looking likely for Monday Oct 1. The weather has been stable for the past few days but high lenticular clouds are gracing the top of Cho Oyu so this is a sign that the weather may be beginning to deteriorate over the next few days. A close eye will be kept on this by Dean & Mike. All in the group are reported as feeling well and in good health, and Curt and Raymond are happy that they have already set personal high altitude records by reaching Camp II height. Now they are looking forward to climbing into over 8,000m on summit day.

October 4 - Continuing to Snow at Base Camp
An update from the team at Cho Oyu Base Camp indicates it is still snowing at Base Camp and it's snowing and windy on the upper slopes of Cho Oyu with all of the remaining teams on the mountain having to stay put in their tents today rather than moving higher. No one has reached the summit since Sept 30th. For expedition leader Dean Staples, he now also has to turn his thoughts towards his next expedition, which is the Adventure Consultants Ama Dablam Expedition 2001, as the team members for this expedition will meet in Kathmandu at the Garuda Hotel on Oct 15th. Our Island Peak/Lobuche Expedition, led by Helen Sovdat, will also meet on this date and will be accompanying the Ama Dablam climbers to Base Camp before continuing on to Everest Base Camp, Kala Patar, the Kongma La, Island Peak and Lobuche.

October 3 - Summit Attempt on Cho Oyu
The Adventure Consultants climbers have returned to Cho Oyu Base Camp without the summit being reached, but not for lack of trying! By Sunday 30 Sept they had moved up to Camp III (7,500m) in preparation for their summit attempt the following day. They set out very early in the morning on Oct 1 in windy and snowy conditions, and climbed until they reached the rock band at 7700m. The weather began to deteriorate further so a decision was made to turn around and retreat to Camp III.

After waiting most of the day at 7,500m on Oct 1 for the weather to improve they made a collective decision to descend, since by all reports the weather was getting worse and it was now snowing at Base Camp also, and snowing heavily on the upper mountain. Camp III was broken down and they retreated off the mountain arriving back at Base Camp on Oct 2. All up they spent over 24 hours at Camp III height, using oxygen for sleeping, so physical reserves have been sapped and another attempt is not possible. This season on Cho Oyu the weather had been reasonably good up until this point. The AC climbers have accepted the fact that the weather has not been on their side on this occasion, even with a very flexible itinerary, and they are now packing up Base Camp to prepare for the overland journey back to Kathmandu. The yaks have been ordered for Oct 4th and hope to be back in Kathmandu by Oct 6th. 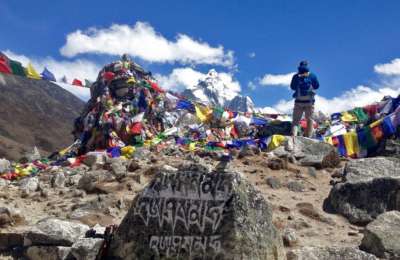 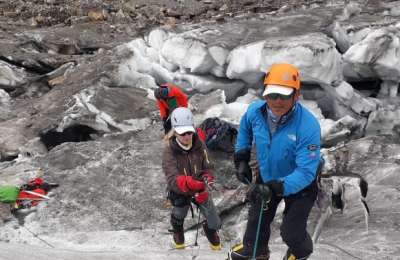